Sustainability has become THE topic of conversation over the last 5 or so years when it comes to fashion and for good reason considering global warming is only getting worse with every passing day. However, I can’t help but notice how it has also become a weapon of shame used against those of us who are unable to shop the same way our well-off and/or straight size peers can. Speaking from experience, when your income is low you typically have no choice but to shop places that will allow you to stretch what you little you can spend. Often what happens with this is that thoughts around quality and even quantity goes out the window. For the most part its a “you take what you can get” kind of mentality that takes over so the last thing on your mind are fashion trends and/or social issues. And this gets harder when it comes to shopping plus. Which is not to say that no sustainable plus size fashion brands exist, they do. However the reality is that many of us can’t afford to put down $100-400 for a dress or basic top even if it is for a good cause as “saving the planet.” However, if you are in a position to support those brands, please do, just don’t come for those of us who can’t. END_OF_DOCUMENT_TOKEN_TO_BE_REPLACED

When it comes to sustainable fashion, plus size options are definitely hard to come by. Especially affordable plus size sustainable fashion. Until very recently it wasn’t an option for me simply because I was priced out given my limited budget. Even still, I do my best to be as sustainable as I can with my fashion choices – going so far as making sure to donate as many pieces as possible when clearing out my closet twice a year as well as repeating and remixing outfits which with this new digital age in which everything is documented on social media, is a big “no no.”

The one thing I will admit to being difficult is keeping away from fast fashion. For one thing, companies like SHEIN have managed to give plus size people more style options than any other brand I can think of. From sexier silhouettes to simply replicating straight size options in larger sizes (without additional embellishments like sequins) which many of us have been asking for the longest time, and all at a lower price that makes it obtainable for those of use looking for more affordable plus size clothing options. END_OF_DOCUMENT_TOKEN_TO_BE_REPLACED

Back in December, I spent some of my holiday break  going through my Facebook blog page DMs from readers (yes, I actually make time to read and answer those) and this was one of the ones I had received:

I’m not going to lie, the question took me off guard to the point that I failed to formulate an immediate answer. So I simply wrote back that I needed some time to process this a bit, promising that I would cover this topic on the blog as soon as I could.

Weight loss is such a touchy subject. Understandably so as it triggers a lot of difficult memories and emotions for many of us, especially if you are a woman. As someone who grew up being constantly criticized, bullied and even publicly humiliated for my weight, I still cringe a bit when Weight Watchers is brought up in conversation. (For context I was gifted a membership to that program by my Great Aunt when I was 9 years old and subsequently continued to do so until the day I turned 18, but that’s a story for another time.)

I came into plus size fatshion through the body positive movement and I know that for some people its the opposite. This was back in 2009, before it all went mainstream and body positivity, as it applied to plus size bodies specifically, was more along the lines of size acceptance. I was 19 and had a history of leaving the mall in tears for not being able to find anything that I liked that fit and was actually affordable.  I told myself that I hated fashion but the truth was that I hated the fact that the fashion industry just wouldn’t work with my body.  I believed that in order to have things like respect, love and nice clothes, akin to that of my thinner peers, I would have to lose as much weight as possible first.

That’s when I stumbled onto The Big Girl Blog by Cece Olisa. It was purely by accident, as I had been online shopping for plus size club clothes since I had been invited to a party that called for that kind of thing. I kept reading post after post and ended up finding other similar blogs that covered topics such as dating, fashion and, of course, body love and body positivity. Motivated by what I read,  I started to unlearn the negative “lessons” that had been instilled in me and learned to love and celebrate the body I have. END_OF_DOCUMENT_TOKEN_TO_BE_REPLACED

Does this year’s CURVYcon Glitter (formerly Teal) swagbag deserve all the hate it got on social? After following the heated discussion on Facebook, I simply had to find out for myself. Thanks to a friend of mine I got the chance to compare the two swagbags from this year and record my findings. Check out the video below and let me know your thoughts!

Disclaimer: This video was recorded on Thursday, September 20th but I didn’t get a chance to edit it until this weekend due to a hectic work schedule.

I was getting ready to leave the office to head straight home for the weekend when I spotted an ad for the new line on Instagram. I scrolled through a couple items on my phone and ultimately decided to stop by Target by my apartment before heading home. What makes this line very special is that for the very first time Target decided to make every piece available in plus sizes. This is major as this is coming from a brand that at one point had no plus sizes available in store or online for a solid  2 years back in 2010. I greatly appreciate the fact that everything in this new size inclusive fashion line (sizes range from 0 to 26W) is quite affordable with everything from clothes and accessories being just under $40. 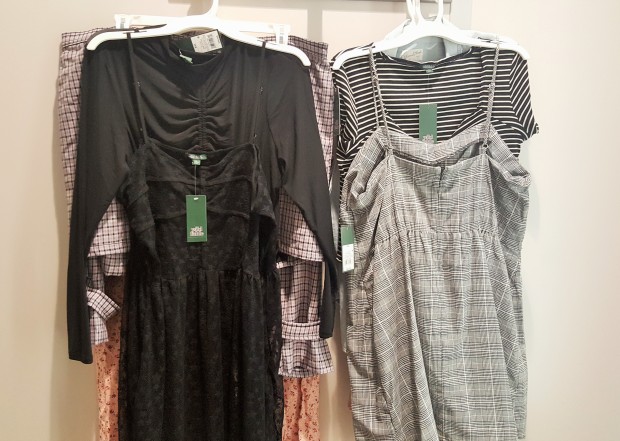 Took 10 items with me to the fitting room, only 5 were winners this time around.

While the plus size items are  hung in the space as the straight sizes, I should note one sad reality – a great number of these aren’t available in store so once again we are forced to do most of our shopping online. In following the line’s launch on social media, I noticed that some stores have more items available in plus than others so if you are dead set on trying things on before buying (like I am) get ready to travel to multiple Target locations. That said, I did try on some items from the straight size section that had some stretch and found that they fit just fine. END_OF_DOCUMENT_TOKEN_TO_BE_REPLACED