Last month we saw the unique collaboration between body positive artist, Jonquel Norwood of Jonquel Art and plus size fashion designer Courtney Smith of Courtney Noelle Inc. The brain-child of Jonquel, this event brought a different kind of fashion event – one that definitely put a spin to the concept of “wearable art.” 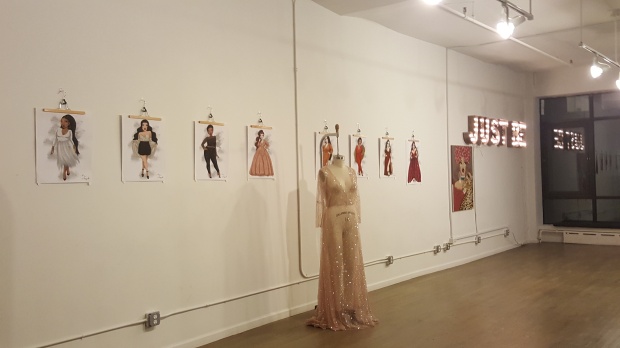 This event was one that I was really looking forward to since the day Jonquel first mentioned the idea of working on an event that celebrated both fashion and body positive fashion illustration. After all when people think about art it is rare that fashion is considered as part of that category. Yet the fact is anything that is designed, be it fashion or otherwise, is perfected first on paper with illustration really being a major part of the process toward the end result so it stands to reason that art and fashion shouldn’t stand so independently as they often are. Nevertheless, what made Curvy AF so unique, besides the unapologetic name of course, was the idea of having the holiday fashion show and accompanying art exhibition to not only provide a unique shopping experience, but more importantly empower women and prove that style and beauty have no size.

Art with fashionable women is not new but Jonquel’s work is relevant for when it comes to fashion illustration plus size bodies are the last thing you expect to find – especially dressed in styles that the fashion industry has made a point to say women above a certain size should never wear. I greatly admire her eye for great style as she even references straight size fashion designs to clothe her models, reworking them to show how they could work on a plus body. END_OF_DOCUMENT_TOKEN_TO_BE_REPLACED

Yes, the “Shrek” franchise received it fame for being  the most anti-fairy tale family film ever conceived though it does play with many of the tropes, many of which were created by Disney, in order to make fun of them. However,  the franchise is noteworthy for depicting a very real relationship in an animated feature with characters that are visibly plus. (Now as an adult I can’t help but wonder if this is meant to convey that only “average people” have relationship problems that need solving, but that is a discussion for another time and place.) END_OF_DOCUMENT_TOKEN_TO_BE_REPLACED 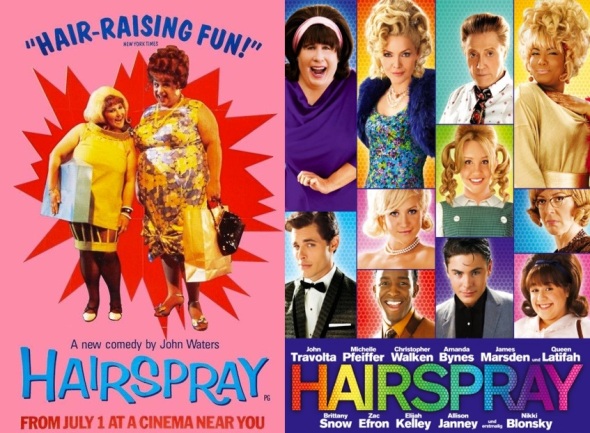 Hairspray is a very interesting film and musical as the protagonist is plus size but the story presents a character of this body type be more than just a source of humor due to “gluttonous practices.” The heart of the story is the theme of acceptance of difference, whether it be size, race or even economic background. The protagonist, Traci Turnblad, uses her privilege and local celebrity platform to bring on a cultural change which in this case involved integrating a very popular dance show. The very title implies the significance of appearance which is conveyed better in the 1988 original with the opening sequence being that of the council members getting ready to  go live on television.

I truly believe that what makes this Hairspray so appealing is the layers that come with it. The story follows Tracy’s rise in dance show scene, the racial conflicts of the 1960s, the socioeconomic differences of their community, as well as the relationship between the two mothers, Edna and Velma, and their daughters, Tracy and Amber. With the live broadcast of the musical adaption set to air tonight, I thought it would be great to take a look at these two very distinct films and how they help set the standard for what makes a great body positive, plus size protagonist lead story.

END_OF_DOCUMENT_TOKEN_TO_BE_REPLACED

It’s been a while since my last post and if you follow me on Facebook and Instagram, you know about the unexpected death of my beloved laptop. (Poor thing was only 2 years old…) However, thanks to my good friend and mentor, I now have a borrowed laptop to work on which has allowed me access to resume work on my blog. And I’m happy to report that I have a few outfit posts in the works as well so stay tuned for that. That said, let’s move on to today’s discussion: animated plus size characters.

Animation is an often snubbed form of media as it is usually geared towards children. For the most part this is our first introduction to Western standards of beauty (or at least it is here in the US) with fat bodies not being the norm. These often negative portrayals, though many are brief, tend to perpetuate negative stereotypes and body image perception, even more than live action portrayals. Media on a whole reflects society’s standards and beliefs of body image, but animators usually exaggerate it as they see fit, usually for a “comedic effect.”

I present to you Exhibit A.

So when we are continuously fed this idea that being bigger makes a plus size person undesirable and the punchline to a joke, it limits what they are capable of which is not a message you’d want for any kid.  Fortunately, there were a few positive representations that do make it to the screen that helps change this visual practice. By “positive” characters I mean that their characterizations and story lines are not specially linked to their size or limited to archetypes like comedic relief, instead they are truly fleshed out personalities. As one can expect these characters had brief appearances  in their respective films or series, but they do leave  quite the impression as they challenge the controlled image of what a plus size character is. With that in mind, here are my top 5 positive animated plus size characters.

**It stands to reason that there are spoilers ahead, so consider yourself warned.**

Disclaimer: This list is completely made up of female characters, however, I am considering making another list specifically about plus size men in the near future.

END_OF_DOCUMENT_TOKEN_TO_BE_REPLACED

Its been a while since my last installment of the +Size Matters series. I know I promised the internet that I would be posting regular videos, that clearly has not been a thing I could actually do. So while I am not going to promise anything else, I am just going to do my best to post videos when I can. Another promise I had made was that my next video was going to be a +Size Matters review of Shrek and that’s turned out to be very difficult because of what I want to present with that video but it is in the works. I am still editing and trying to find usable footage so keep a look out for that because it will hopefully be done by the end of the summer.

If you follow me on Instagram you know that I’ve been talking about Faith for a while. I have been happy and excited about it since it was announced last year. I even went as far as visiting the  Valiant Booth at NYCC last year for some Faith news and possibly merch. Until this point I didn’t see a plus size superhero unless it was on deviant-art. It is highly unlikely that Faith will be the first and the last plus size superhero. Faith is probably not going to be the last plus sized super hero. While most people don’t see the need for such a hero, I do.  I grew up watching X-men the Animated Series, and as much as  I loved the characters Jubliee and Rogue, I would have liked someone in the cast be someone that looked like me. I have never been hourglass and thin like those characters were so to see someone with a more realistic body shape would have been very empowering. I am more of a Marvel fan and I hadn’t heard about Valiant until recently, though considering the fact that they announced that Faith is getting a full story run beginning in July, they definitely have a new fan. Check out my review below!

Disclaimer: I don’t give much of a plot summary because I wanted to make sure that this review was spoiler free for those who haven’t had the chance to read the mini-series, but basically the series follows Faith as she tries to have a life away from her former crime fighting team while saving the innocent when a new threat arrives. The series does reference the Harbingers comics, though just enough to remind the reader where this character is from and where Faith’s story began.

I am very happy to announce  that this video includes my first giveaway ever!  To learn more about it, watch until the end of the video. Originally i was going to hold off on this giveaway and video because I wanted to get these signed at comic con but for the first time in six years I will not be able to go because I can’t afford a ticket. (Those are the realities of being unemployed.)

Visit my Rafflecopter page here for a chance to win this complete set of comics.  Winner will be announced on Wednesday, June 15th at 12 pm EST. Good luck!