Yes, the “Shrek” franchise received it fame for being  the most anti-fairy tale family film ever conceived though it does play with many of the tropes, many of which were created by Disney, in order to make fun of them. However,  the franchise is noteworthy for depicting a very real relationship in an animated feature with characters that are visibly plus. (Now as an adult I can’t help but wonder if this is meant to convey that only “average people” have relationship problems that need solving, but that is a discussion for another time and place.)

It would be easy to write off this film series as negative just for the intentional use of plus sized characters particularly the titular character, Shrek and his love interest, Fiona to help represent ugliness for a story meant to demonstrate the moral of not making judgement based on appearance. Fiona refers to herself as an “ugly beast” when she is revealed to be under a curse that transforms her into an ogre once the sun goes down.  For the most part it is implied that she is referencing to how she turns into an ogre rather than her size, however both are obviously linked together. When she is introduced, she comes off as a traditional princess well versed in court behavior and has a strong sense of the social classes, however later on it is revealed that she shares many of Shrek’s habits and is quite the warrior, knowing  martial arts. A trait that continues well into the other films to the point that she is depicted as the leader of the ogre resistance, complete with followers that both fear and respect her. This is honestly my favorite part of her character as it  demonstrates that size is never a deterrent  to physical activities like taking down oppressive rulers.

So its not surprising that unlike traditional fairy tale stories Shrek is attracted to Fiona’s personality and how she is open to getting to know him – not her conventionally attractive appearance. What I like about this angle is that it does strip away the usual or rather expected trope of “fat guy/thin wife.” By giving these two characters a genuine connection the films become a very positive representation of what a relationship is. Something that is built over time and based on something more than just appearances. My favorite part of this film is the Shrek’s reaction to Fiona’s ogre-self. He doesn’t freak out like Donkey or even grimace in disgust like her “fiancé”, Lord Farquaad, when she no longer looks like her princess-self. Rather he simply says, “Well, that explains a lot, ” as he realizes how he misunderstood who Fiona was referring to as an “ugly beast.”

And in regards to this pair of characters, besides their great character designs that consists of non-idealized plus bodies, the fact that they remain ogres for the entirety  of the franchise was a pretty bold move for an animated feature. Sure, it is implied via Fiona’s curse rhyme that she will “take true love’s true form” after she receives “true love’s kiss,” yet  it would have been very easy for this story to fall into a Disney trope and have the couple end up thin and human as a sort of “reward” for learning to love based on something other than what they initially saw and thought of each other. Even with Shrek stealing the “Happily Ever After” potion from the Fairy Godmother which gave him a conventionally attractive appearance (that included weight loss) and reverted Fiona to her original form, they still end up as ogres – the form they chose to have though not seen as agreeable by most of the court. 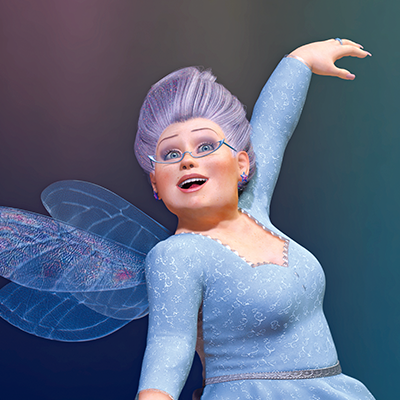 The only other plus-sized character that is prominently shown is that of the Fairy Godmother, and she is depicted as being a glamorous fiend rather than a stout grandmother-like maternal figure like that of Disney’s “Cinderella”.  There is a long history of featuring plus size characters as villains in almost every form of entertainment and media, yet what makes the Fairy Godmother different is while being the antagonist of the first sequel, she has a pretty positive self and body image… for the most part.  She wears form fitting clothing with a sweetheart neckline that accents her bust. She also makes a point to being the center of attention as demonstrated by her tendency of creating a scene complete with musical numbers. (Her rendition of “I Need a Hero” remains my favorite version of that song.)

This isn’t to say that DreamWorks wasn’t above using size and weight as a source of humor as evident in the fourth film where the character of Puss-in-boots is shown to have “let himself go,” becoming a pampered fat house-cat that needs help to do even the simplest tasks or how the Fairy Godmother references her diet and her habit of turning to eating when upset on many occasions in second film. Yet three steps towards progress kind of makes up for the small step back, at least in my opinion. The only other unfortunate thing about this franchise is actually not related to body image at all, at least not directly. When it comes to Fiona, she doesn’t get much of a chance to engage with other women until the third film installment when she is given a baby shower by her princess friends. I think it would have been interesting to explore how Fiona takes to her new appearance when she is surrounded by family and friends that do not look like her. Having grown up plus this was my reality and to see that explored in the fairy tale realm where everything is basically meant to be “ideal.”

Unintentional or not, the “Shrek” franchise is one of the very few implicitly body positive animated films that does work towards providing a different perspective in terms of body image and representation in film narratives, particularly those aimed at children. Showing that the widely accepted “ideal” be it our personalities or bodies, shouldn’t be what is celebrated, instead it should be our uniqueness.

Which should be reviewed next for my +Size Matters blog series?

ABOUT THE SERIES: Whether or not we are conscious of it, what we consume as entertainment has a great impact on our personal growth and identity. In many cases media literacy has been dismissed to be unnecessary, yet the truth remains that media influences social ideals and constructs of such concepts as gender, race and body ideals. Disregarding the significance of media in turn promotes the continuation of stereotypes and fosters a negative self-image especially in girls and women. Critical media consumption aids the fight against the over-sexualization, and under-representation of women, that can lead to the creation of works that aid female empowerment. It all starts with us. With that in mind, “+ Size Matters” will analyze past and present plus size representation in media as doing so sheds light on the beauty/body standards and stereotypes that still need to be broken.